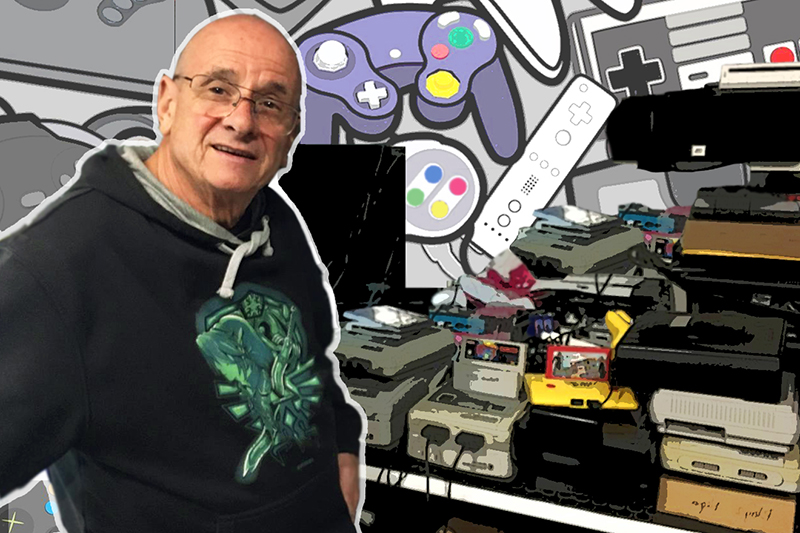 Juan Santos, one of the figures in the retro scene in our country, has been dedicated to video games for many years, not only as a seller but also as a player. In the Madrid neighborhood of Vallecas, specifically on Calle Puerto de Arlabán 41, his store is located, Tecvia, a reference for lovers of classic video games and a mandatory stop if you are passing through the capital.

Although visiting his place is a real joy for the senses, as it teleports us back to the golden age of the video game, the best of all is Juan himself, a close person with a lot of knowledge of our hobby who always invites us to come to his workshop in the back room, the place where our classic consoles get repaired and even improved. Today we have returned to Tecvia for a visit and a little interview, and incidentally we have also brought a GameCube and a Sega Saturn light gun that needed an overhaul.

When did Tecvía start its journey, Juan?

In 2000, after I left Spaco. After two years, I took advantage of the unemployment, and with the dismissal and some savings we were able to buy the premises.

What did you do before?

I've always liked electronics a lot, but I've done quite a few jobs. I have been in a printing company, in a hardware store ... always with manual jobs. I was also working on plans, as a draftsman - although I am not - in an architect's office, as an assistant. Then I started as a technician for the company Spaco, which at the time was in charge of distributing the Nintendo NES game console in our country.

The market and the retro side of video games seems to have experienced a strong boom in recent years. Do you get a lot of classic consoles for repair and do you really buy as much retro gear as it sounds?

Well man, really, having a huge amount of products and having problems with the boss, my wife (laughs) for not knowing what we were going to do with all the material we had, I told her: calm that the product had to come out . I somewhat imagined because in Spaco I already knew people who had started to collect. It was at that moment when I began to take a lot of things, at that time on sale. Items that they no longer wanted and I said: so bring it. I still liked retro, I kept playing with my NES, with my Super, Mega Drive ... I was still doing my thing. I have always liked the topic of treating them and knowing their structure, because I launched myself into it. I started with the NES, but little by little I specialized in the other consoles as well: Master System, Mega Drive and such. As more consoles arrived, he studied them. That's what happened.

The surprise for me was not that people went back to retro, in fact I was convinced that many people had the same feelings as me. There were increasingly powerful environments and consoles, but they didn't tell me anything. All are very nice graphics, but most of them are copies of what we have already seen. Many current games did call me but others not so much, that's why I returned to 2D, I like it a lot. The real surprise was the price that the classic product was going to acquire.

What are the consoles that are most commonly brought to you to repair, Juan?

Well, as I say, the classic ones, the usual ones are NES, Master ... but of course the ones that arrive the most at the store for repair are the consoles with a CD and DVD player. It is logical, it is exhaustion and you have to change the readers. The consoles of a lifetime, as I say, are practically for life! Each one has its Achilles heel but they are very hard. Repairing a classic console is easy. The faults they have are not electronic component faults, almost all are simple faults, such as poor connection, broken tracks at the input of the connector, etc. But they are tough, tough consoles. People, for the most part, bring them to improve or modify them. Specifically, the improvement in its video output. Here they put us the PAL and currently everything tends to be seen in 60Hz. This modification allows you to view the game better, with more color and a full screen. People look for this, they don't like the lower and upper lines that the old televisions kept.

What's the most surprising or proud mod?

Now it is a very common thing and it is less complex because micropic is used, but years ago to modify the Super Nintendo or the Sega Saturn and make them multi-system I had to work on the structures. The happy little levers always tried to put them in places, that they were not seen, and trying not to break the structure of the console. Parts of hardware Y software.

And what are the most common or most successful modifications?

The most common are those of Super Nintendo and Mega Drive to make them multi-region and 50-60Hz.

Well man, there are many. The ones you remember the most are the bad ones. On one occasion, I remember a man who brought me a PlayStation 2 to repair and when we returned it to him he told us that it was not his console, that his console was not full of shit like this. I was surprised because I always try to deliver clean consoles, it is true, we have cleaning products throughout the workshop, but the fact is that it was true, on that occasion we did the repair but we did not clean it. I automatically went to the serial number that we had written down and said:Are you telling me that we are dirty or that we are giving you another console? Look, here is your delivery note with the serial number on your ticket, does it correspond or not? and said: yes, it corresponds, and was silent.

Still, we gave him a cleaning and a polish and he was already happier. I was shocked that it was not his console because he did not see it clean. People, when they bring their consoles, do not notice how they bring them, they notice when we return them. At that time they look at details or bugs that they already brought before arriving with her at the store.

Do you feel a special affection towards a specific platform?

I like very much the NES. But I've played with her so much that I don't know if there will be any games that I haven't played. I still enjoy some, but the one that itches me the most is the Super Nintendo.

And a favorite game?

There you have it ... (Juan proudly nods at a Super Nintendo with the Super Metroid cartridge embedded)

We all suspect that the end of physical format is getting closer, Juan. Do you think the generation of PlayStation 5 and Xbox Series X will be the last in physical format?

Do you realize that people are still looking for consoles that have a reader? I am not looking for the digital format and there is fear that network providers will close down. I play online, but what if it breaks down? I think not, there will always be a latency, there will always be people who want the physical form. Nowadays you can buy a game in digital or physical version, but I always look for the physical format.

Do you think that the retro material that we have will be revalued even more when the physical format has disappeared, if it disappears, completely?

I think so. Seeing the prices that some consoles of the 70s reach, with figures of 600 or 700 euros. These types of items are no longer attractive to play with for most people, but the price tag is incredible. Even if they are only for museums and exhibitions. I do not know if this will happen with a PS1 or the PlayStation 2, there are millions of them, but there was a time when nobody wanted them and now they start to rise, just like Nintendo 64. What happens with these consoles is that what is costing the most are the components. A power supply from an N64 is worth more than the console itself. I am not telling you a expansion pack, we have sold them for € 25 and the last one I bought cost me € 70 with box. How can this product cost € 50 without a box when the console is not currently worth it?

They may have told you many times, Juan. Tecvia is a marvel for those of us who have been playing for a long time. There are few stores like yours, seeing your workshop and your desire we want Tecvia to continue for many years, do you plan to retire from video games at some point?

(Laughs) No, I think I'm not going to retire on the subject of gambling and mischief about it. In addition, I have friends in this world who are brains in terms of programming and others, and they look for me as a technician, not as an engineer, of course, as handymen, you have to weld this and ... you have to do it fine. I loved it, because I love doing this.

Very good Juan, because our brief interview ends here. Thanks for your time.

You're welcome man, a pleasure (laughs)

Video games are one of my great passions. Currently I write specials and analyze the latest titles, always maintaining a valuable connection with those classics that marked the course of the video game. Strong defender of all mechanics that defy commercial and accessible trends. Editor-in-chief of BornToPlay