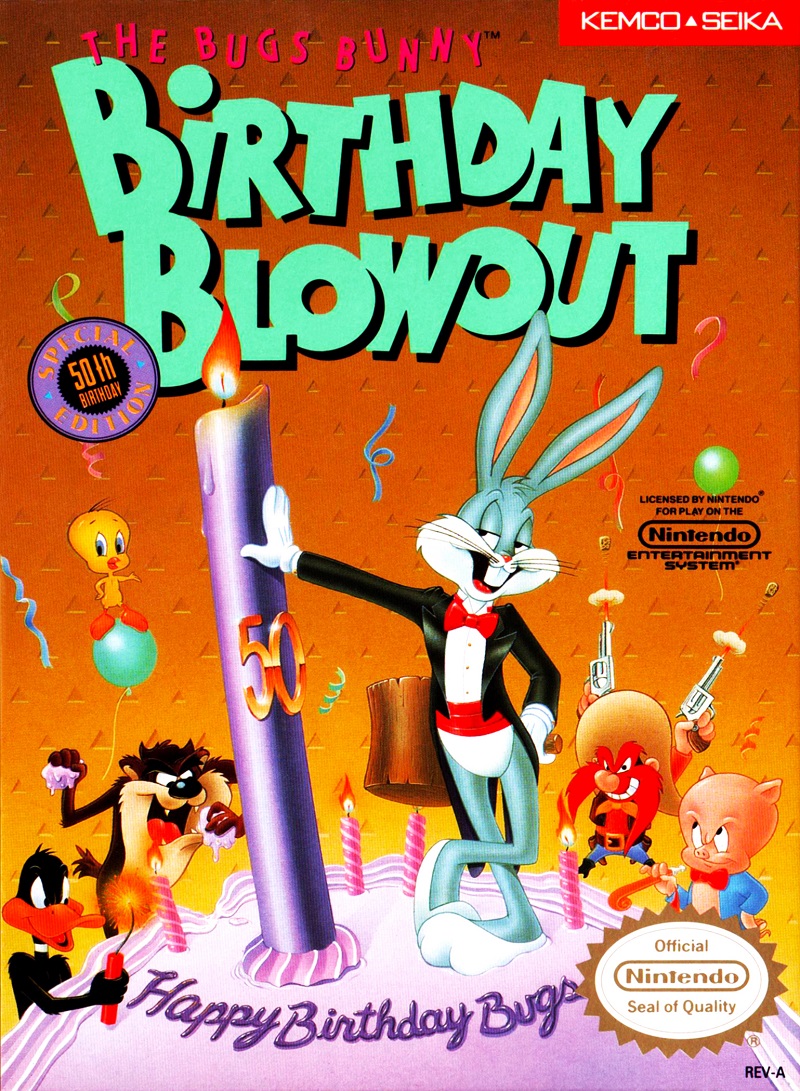 Using famous characters from comics and cartoons in mediocre video games was common practice. Bugs bunny, being the most representative character of the Looney tunes, was the lucky protagonist of several games developed by programmers of dubious talent. In those days, seeing Bugs with his insane friends in a game box was reason enough to want to play it. The Bugs Bunny Blowout is honored to rank among those NES games that got the worst out of it. charismatic characters and adored by children around the world.

The challenge is to overcome six worlds and their respective four levels. The setting of these worlds is varied, but typical. Forests, caves and deserts are represented in a simplistic and somewhat decaffeinated style. On the other hand, the levels have a good distribution of obstacles, although the constant reappearance of enemies can be frustrating in some situations.

The game system is based on jumping platforms and killing enemies with a mallet. The control of the movement of Bugs is precise, we have a good speed and a high jump or a half jump depending on the time we hold down the corresponding button. However, the collision of the weapon against the enemies baffles by a lousy implementation. It is more profitable to dodge or position ourselves on these than to try to hit them with the mallet.

The enemies are repetitive, simple and absurd. We can list them in two lines: explosive clocks, little people with hammer heads, a kind of flare, soap boxes, dotted lines and some insects. At the end of each level, we face the well-known Warner characters, from Daffy Duck to the Tasmanian Devil. These fights are totally uninspired and boring because of their extreme simplicity.

The most negative aspect of this title is the disastrous side and vertical scrolling of the screen. The developers discontinued the lesson on scrolling smoothness in Super Mario Bros. Therefore, what could have been an entertaining and simple game with good platforms, becomes quite a method for dizziness and loss of vision.

The sound section contributes almost perfectly to this feeling of dizziness and the aforementioned repetition with respect to the enemies. The music consists of a short composition of a few seconds, one for each world, which is repeated in a loop. Some are quite acceptable, but the constant repetition can make you as crazy as these cute drawings. Fortunately, the game is not long or difficult.

Ultimately, the only enjoyable aspects of this title are the layout of the obstacles and good graphics for 1990 standards. The repetition of enemies, the terrible scrolling of the screen, the pounding music and the uninspired fighting against these beloved cartoons animated, make Blowout a mediocre game, only suitable for patients with 8 bits.

I would like to take care of a hermitage, dedicate myself to reading, writing frequently and enjoying the game.