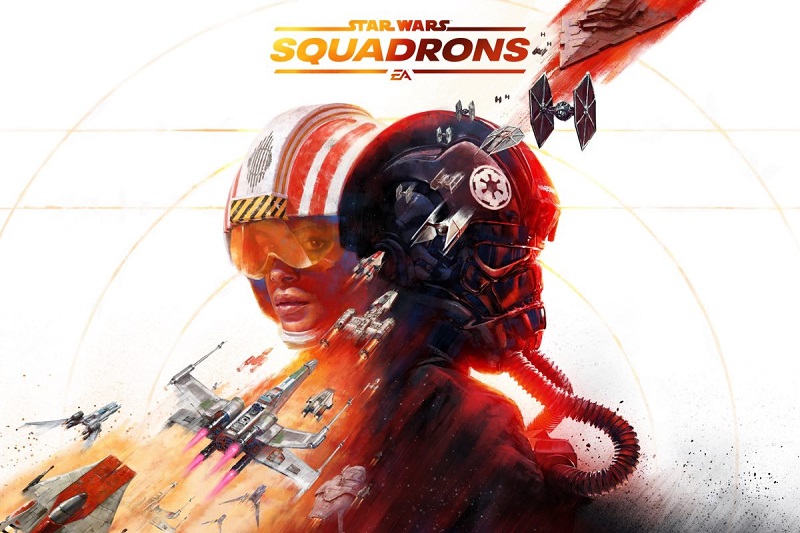 The most diverse starfighters in the galaxy

As it happens in Star Wars Jedi: Fallen Order, EA sneaks a keyword into the title of their latest release in the Star Wars universe, squadrons, which raises in the memory of many players that other game published by LucasArts and Nintendo in 1998. However, Star Wars: Squadrons share with Rogue Squadron 3D only a clear orientation to direct action, so we must seek its foundation in other video games focused on combat between the most famous starfighters in the galaxy.

In particular, we have to go back to the nineties, when some lucky ones fulfilled their dream of wearing the orange jumpsuit of the Rebel Alliance or the elegant uniform of the Empire. The PC game series known as Star Wars: X-Wing, taking as a reference Wing commander, attempted to create a space combat and starfighter piloting simulation experience accessible to all types of players while being complex and profound.

These games made extensive use of keyboards to allow the player maximum control of the different instruments and elements of the ships. Due to this complexity in the commands and the forced use of a joystick In some of the titles in the series, the player felt that he was actually piloting a starfighter in numerous space battles for control of the galaxy.

Star Wars: Squadrons briefly recovers the game system of these titles, especially that of X-Wing vs TIE Fighter, without reaching the simulation levels that were achieved 26 years ago. The EA title has been released for multiple platforms and the game mechanics have to be adapted to the controllers of the consoles with the limitations that this entails. In addition, the predominant gameplay is focused on dynamics clashes between multiple players, so the control must be more balanced and accessible.

The game system of Squadrons is halfway between the simulation of the series X-Wing and the direct action of Rogue Squadron 3D. From the first, some aspects of the starfighter simulation, so it is important to understand the instruments of our ships, such as the distribution of energy between engines, weapons and shields. From the second, the focus is simply regained on quick, improvised action.

Squadrons proposes us to fight in a series of space skirmishes between the Empire and the Rebel Alliance aboard the best-known starfighters in the Star Wars saga. We are allowed to choose between four ships per faction. On the imperial side we have a TIE Fighter, a TIE Bomber, a TIE Interceptor and a Tie Reaper; while the Rebel hangar features the T-65 X-wing, BTL Y-wing, RZ-1 A-wing and UT-60D U-wing. A recent patch includes the B-wing and the TIE Defender. Each fighter has its own characteristics and plays a specific role in the battles.

Competitive multiplayer games comprise two modes. The first, Fray, is a direct confrontation between two teams of five players that aim to cause the highest number of casualties. The second, Fleet battles, consists of completing various objectives in order to shoot down the flagship of the opposing team.

From our hangar we can select the fighter that best complements our team and modify the engines, the hull and the armament of each one of them. The games are fast and our success depends largely on the rapport with our squad. Although playing with a microphone to talk with your colleagues is very useful, we also have quick commands to point out enemies, mark objectives and share information.

As we have commented, this video game focuses on multiplayer mode, but includes a short campaign that serves as a tutorial to control the different ships. We play as pilots for both factions so we watch the story unfold from both perspectives.

Is double narrative it would be really interesting, if the characters didn't completely blur the classic idiosyncrasies of the Empire and the Alliance. These are as flat in character as hangar menus, your comments are irrelevant to the main plot and do not contribute to developing any aspect of the expanded universe.

The battle maps where the missions take place are quite limited and there is a lack of ample locations where to fight. They don't get the sense of vastness that flying across the galaxy should bring, but as this is a competition-focused game, the map's limitations should be clear.

On the other hand, the missions they are fun and quite spectacular. Although the argument is weak, once we find ourselves piloting our ship, it only matters to meet the objectives. These range from a simple flight to inspect freighters to the destruction of capital ships. In short, the campaign fulfills the function of teaching us the most common techniques of closed space combat or dogfight in the language of Shakespeare.

We should mention that during our playing time we have found multiple errors that have forced us to restart some missions, as this title, both on PC and PS4, seems to get stuck at certain points in the campaign. Despite this and how frustrating to find a bug that prevents you from moving forward, the campaign can be completed in a couple of afternoons.

Star Wars: Squadrons is far from quality and the content offered by its predecessors. You need to be able to participate in the classic battles from the Star Wars universe and a campaign with a longer duration that respects the original material. However, the gameplay mechanics manage to get us into the cockpit and put us back in command of the most popular starfighters in that galaxy far, far away.

I would like to take care of a hermitage, dedicate myself to reading, writing frequently and enjoying the game.