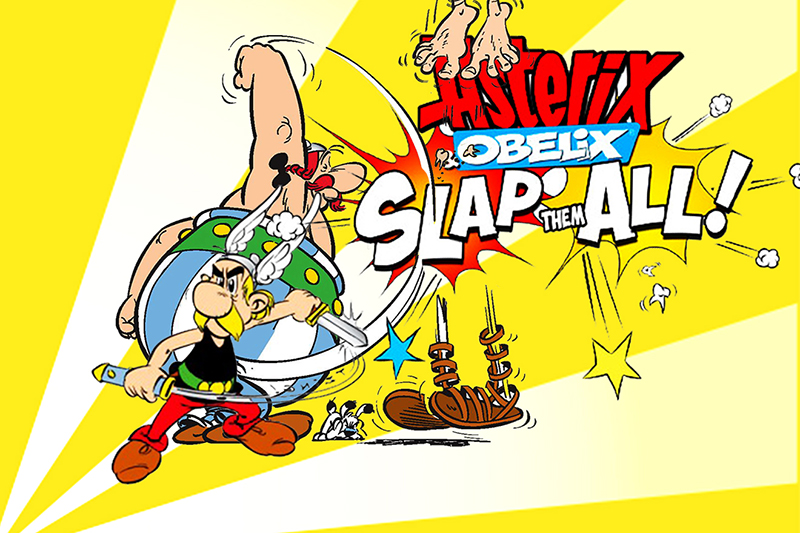 Asterix & Obelix review: Slap them All

When we were kids we spent weekends playing video games and reading comics. In Spain, we enjoyed the vignettes of Captain Thunder, The Wild Boar or Mortadelo and Filemon. On more special occasions, they gave us a comic of Asterix the Gaul. Those hardcover, full-color albums seemed a joy to us, without detracting from the works mentioned above.

On the other hand, the animated films of the Gaul, regularly broadcast on television, competed with the comics for our attention. Today all this can cause nostalgia in more than one, but this is a double-edged sword. Lately, we feel like game developers get more out of nostalgia than creativity. This analysis of Asterix & Obelix: Slap them All tries to reflect precisely this fact.

This Asterix video game embodies the style of the comics created by René Goscinny Y Albert uderzo. For this reason, the story consists of six acts inspired by the adventures of the Gallic couple. Among other albums reflected in the game are Asterix and Cleopatra, Asterix in Brittany or Asterix in Hispania. The narrative has an episodic character, although the acts are not connected argumentatively. In addition, many of the secondary characters from the comics appear, offering a pleasant family feeling despite the fact that the models are repeated too much.

The animations of all the characters are very well done and reminiscent of those movies. However, the beautiful settings are too austere and we can hardly interact with them. We do not find dangers to dodge during our advance or platforms where we can demonstrate our ability, beyond advancing with blows. There are also no objects to hit enemies, which contributes to a feeling of monotony present during games.

Asterix & Obelix: Slap Them All. A beat'em up very basic

Microids Y Mr. Nutz They sign a very basic title by today's standards. Visually it is attractive, but it has too simple a combat system. As everything beat 'em up, the mechanics consists of advancing by releasing blows. We have two types of attack, grab, block and a special blow that we do not take long to reload. Dispatching enemy games is quite easy, especially if we use the sweep movement. Although functional and classic, we soon appreciated the lack of options regarding combat.

The number of enemies on the screen is considerable, especially in the last levels when we distribute bullets among the legionaries. At that moment, when the blows sound and the faithful Ideafix barks around, it is as if the vignettes of Asterix and Obelix come to life. If we play alone we can alternate between both characters, which gives a bit of variety to the routine of the main mechanics.

Going forward dealing blows with our two favorite Gauls gives a rewarding feeling during the first few games. However, interest wanes due to an annoying monotony caused by the constant repetition of situations and an elemental combat system. Asterix & Obelix: Slap them All It ends up revealing itself as a superficial tribute.

Certainly, this genre has never been characterized by offering a wide range of actions. The routine would have been broken by implementing a system of combos, alternative routes or a greater variety of situations. But this does not happen in Asterix & Obelix: Slap them All. In addition, the levels they repeat too much, like the fight against pirates or the Roman camp.

On the other hand, among the different acts we find two bonus phases: a wild boar hunt and speed races. Both quite bland.

A missed opportunity to reflect the rich world of Asterix

Importantly, the fun exploits of Asterix Y Obelix They are full of unforgettable situations and characters that, between mamporro and mamporro, could have been included to offer variety and at the same time would have served as a fantastic tribute to their travels. Each act could include a skill phase based on some representative moment of that adventure, such as the chariot race at the Circus, the game of rugby in Brittany, etc.

Likewise, include unlockable characters to play as the druid Panoramix, the boss Abracúrcix, the blacksmith Esautomátix or Tragicomix., it would have been interesting. These figures would not make sense at a narrative level, but they would have served to incorporate different styles of play to a nondescript title.

Regarding enemies, the situation would have improved thanks to the classic boss clashes at the end of the level, but unfortunately that is not the case either. These go into action without pain or glory. They appear as one more enemy, without a warning that puts us in a situation. They simply take more hits than normal, and have no special patterns to make them memorable.

Today, building on inspiring classic 2D mechanics, great games can be illuminated thanks to inventiveness and a pinch of technology. Streets of Rage 4, Ghost 'N Goblins Resurrection,Cuphead, Dragon's crown, Inside, Huntdown, are some examples.

Much nostalgia and little wild boar

Asterix & Obelix: Slap them All it's a classic uncomplicated experience. It is true that this fact, a priori, would not be a defect. For example, the absence of a progression system and a cooperative has been criticized. on-line. These aspects seem secondary in a video game of these characteristics. The latent problem results from the conformism that it shows, the little desire to pay tribute to the whole of the work in which it is inspired and that annoying feeling of repetition. A real shame, because there is enough material and potential in his comics to have shaped the ultimate game of Asterix Y Obelix.

For all the aforementioned, this new Asterix video game is a beat 'em up Very classic cut that provides only good graphics. In our days this seems to be little. Taking advantage of only nostalgia or affection for some characters should not be the main ingredient. In addition, the starting price does not contribute to the recipe either.

This is a visually attractive video game, recommended for the smallest of the house thanks to its uncomplicated control. Lovers of the genre will continue pulling richer classics and seasoned by memory such as Cadillacs and Dinosaurs, Teenage Mutant Ninja Turtles or Knights of the Round. Even from that simple konami arcade based on the adventures of Asterix from 1992, as it offers at least a greater variety of final bosses. Anyway, wild boar with mint.

Video games are one of my great passions. Currently I write specials and analyze the latest titles, always maintaining a valuable connection with those classics that marked the course of the video game. Strong defender of all mechanics that defy commercial and accessible trends. Editor-in-chief of BornToPlay