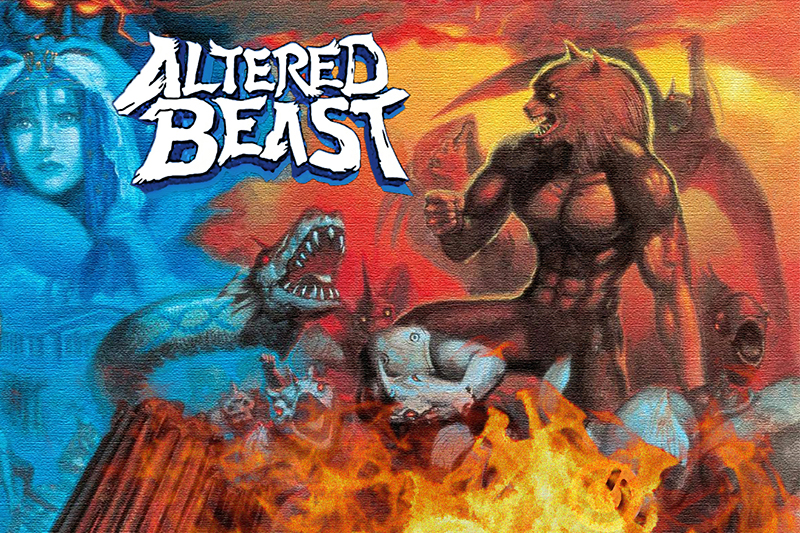 Altered beast it's a beat'em up developed by the same creator of Golden Ax, Makoto uchida. An action adventure with scroll continuous side that mixes characters and elements from Greek mythology with other fantastic creatures. Its peculiar staging teleports us back to the times of the gods and mythological legends. An age where men fought fiercely against supernatural enemies.

The protagonist of this mythical story is a centurion killed on the battlefield. However, Zeus, manages to resurrect you to entrust you with one last mission: rescue his daughter Athena from the clutches of Neff, the god of the World of Darkness.

The rigors of this descent into the underworld require the deployment of a special power. To fulfill our mission, Zeus gives us the possibility of developing a supernatural force through different transformations. To do this, you have to collect three magic orbs that fall after defeating a particular enemy, three-headed white wolves. You must hurry to make contact with the floating orb, otherwise it will escape and you will not receive its energy to alter your body. Every time you catch a Spirit Ball, your strength and appearance change. The transformation process always requires the capture of three orbs. Once achieved, we automatically transform into a beast.

In each of the five phases of the game we have the opportunity to transform ourselves into a single beast. Each of them has different powers and we must familiarize ourselves with their abilities and vulnerabilities. The werewolf throws balls of energy and is able to transform into a powerful beam of light. The dragon flies across the stage and projects rays around it. The bear possesses great strength and can turn his enemies to stone. The tiger man has the power of fire. The last beast, another werewolf, has a golden appearance and is more powerful than the first.

Altered beastAs a good arcade, it is demanding but it knows how to reward your skill. In order to defeat the boss of each level, it is necessary to collect the three orbs and transform yourself into a beast to face him on equal terms. If you don't, you will be defeated. When you get all three orbs, you will be able to sweep the different creatures of the underworld more quickly before reaching the boss, but you must be fast as the three-headed wolves are elusive and you have little opportunity to eliminate them. The mixture of fantasy and mythology is remarkable, with enemies as diverse as zombies, demons, dragons, even some creature from the bestiary of Golden Ax. On the stage, the architectural structures of classical Greece draw attention as a background for all this inventiveness.

The memory of Altered beast it stays alive like the flame of Olympus. The legendary setting, the size of your sprites and the unforgettable animation of each transformation are aspects that endure over time. The possibility that a second player can support us during the adventure is always a welcome option when you descend into hell, and the perfect excuse to play a game of doubles with someone.

Many users of Mega drive they have a special affection for this title. It was the cartridge included in the pack It was released from the console in the late 80s and early 90s. Possibly not one of the most remembered games in their catalog, however it is a very good conversion from the original arcade board to the 16-bit machine of Sega.